Summer is officially here and I’ve got a fun Texas camping road trip for you. On an early spring Sunday morning after church, we loaded the truck up with camping gear and headed out to Dinosaur Valley State Park! 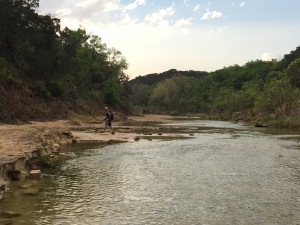 From North Austin, we took a beautiful Texas scenic drive on 183 to 281 to Hico. Oh my yummy goodness! During the holidays, Kyle brought me the most delicious mocha crunch from his favorite chocolate shop, Wiseman House Chocolates. Since it was on the was to Glen Rose we had to make a stop.

It’s the quaintest chocolate house shop I’ve ever seen. As their website says, “Welcome to Chocolate Heaven.” Every room filled with different chocolate treats and gifts. Toffees, truffles, melts, crunches, and a variety of chocolate covered goodness. They have it all and there’s samples of everything. Since I’ve had their mocha crunch before, I decided to try some other treats. I left with the peanut butter meltaways, dark chocolate and pecan fudge, and toffee trio of milk chocolate, dark chocolate, and almond toffee. All handmade, rich flavor chocolate, I can’t wait to go back. 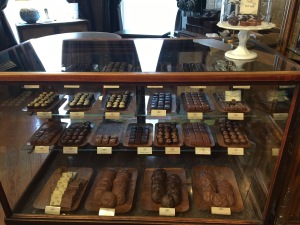 Now that our tummies were happily filled with chocolate, we got back on the road. Actually, it was only a 30 minute drive from Hico to Glen Rose. And queue Jurassic Park theme music because we had arrived at Dinosaur Valley State Park. I literally started playing the theme music as we entered the park.

Checked in and got to pick out our camping spot, between the bathrooms and a hiking trail. We started unloading the truck and pitched our tent. There was dark clouds and rumbles of thunder in the far distance but we checked the weather before we left and it was only supposed to rain for about an hour.

Just as we finished setting up the tent, a park ranger came by and asked if we were packing up and head out. He told us there was a tornado warning for the area, and  that it might pass us with 60 miles per hour winds. So Kyle quickly took down most of the tent and put these weights in top, while I loaded everything non-waterproof back in the truck. 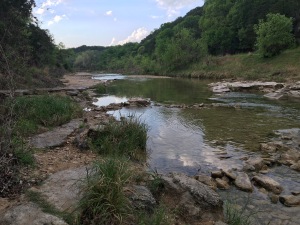 On the drive there Kyle said he was excited to be able to unplug and not have to use his phone. I said I wanted to just use mine to take pictures. Well, I had absolutely no signal and he had one bar of service in roaming. We managed to call his parents and have them check a weather radar and it looked like we were just going to have some rain for about 30 more minutes and that would be all of the storm we’d get.
A couple of hours had passed since our chocolate binge and hunger started to kick-in but the cooler with all our food was repacked in the back of the truck. I thought it was so funny that Kyle wanted to bring some of his MREs but they actually came in handy since we couldn’t start a fire in the rain. We sat in the truck, waited out the storm, and snacked on the MREs.

About an hour later, the storm seemed to have passed and we still had some time before the sun went completely down. We took a look at the map, and decided to try out the trail along the river, just behind our campsite. Wow! As we hiked down to walk along the river, we were both in awe of the beautiful scenery and we even saw a rainbow. What was literally a stormy start ended with a spectacular sunset.

Now sleeping was a different story. We thought we places the tent in a flat area but we definitely didn’t. I tried sleeping with my yoga mat under my sleeping bag, laying on top of my zipped up sleeping bag with another blanket and nope. Princess and the pea moment, the ground under the tent was sand and there way huge mound directly underneath me. Just as I started to fall asleep bright lights came through the tent from the campsite next to us.

It was 1 AM and they had just arrived and started setting up their tents. Eventually they finished and I fell back to sleep. A little bit later we had a visitor smack into our tent. It was an armadillo that ran into the side of our tent! Oh goodness that poor critter was more startled than us. I could hear it frantically scuffling around trying to get away.

Morning came and we woke up very sore from the uneven ground and cold. We made a fire and I had pre-made some breakfast egg muffins. Super simple and easy. I baked them in foil muffin cups and the cooler was so cold that they actually froze. All we had to do was heat them up over the campfire.

•cheese
After breakfast, we took a look at the map picked out a trail and set out to us some dinosaur tracks.

First, we attempted to start on the Blue Hole Trail. We got down to the limestone ledge the map mentions, but we must have passed a beehive on the way. The sweet coco butter scented Sunblock and highlighter pink t-shirt I had on must have attracted the bees. We couldn’t move without a bee trying land on both of us. So we ended up running towards the Horseshoe Equestrian Trail, and passing the Ballroom Track Site. 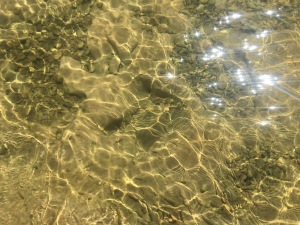 Eventually we back tracked to the Ballroom Track site and I’m so glad we did. There really are so many dino tracks in that area! As we looked around we started to see more, a lot of the tracks were covered with sediment that washed down the river bank from the rain. So much fun kicking around water and uncover tracks. 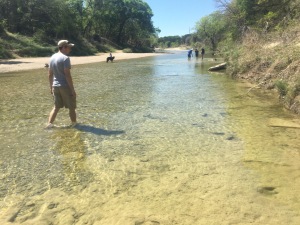 Lunch hangeries started kicking in and we headed back to our campsite. Lunch was quick and lite, sandwiches and pita chips and hummus. Now we both were a little sun drenched and decided to rest in the hammock. The campsite had plenty of great trees around to hang it up and relax. 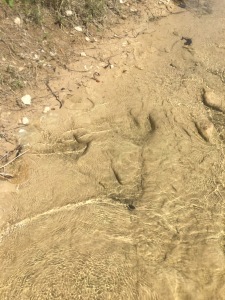 After lounging around for a while we took a look at the trail map and decided to head on another hike. This time we crossed the river and hiked up the Cedar Ridge Trail to the Scenic Outlook. Along the trail there little spots you could catch a glimpse of the view, but the higher you hiked the greater the view. We took a moment to admire it but we had to get back on the trail to get back to our campsite before sunset. 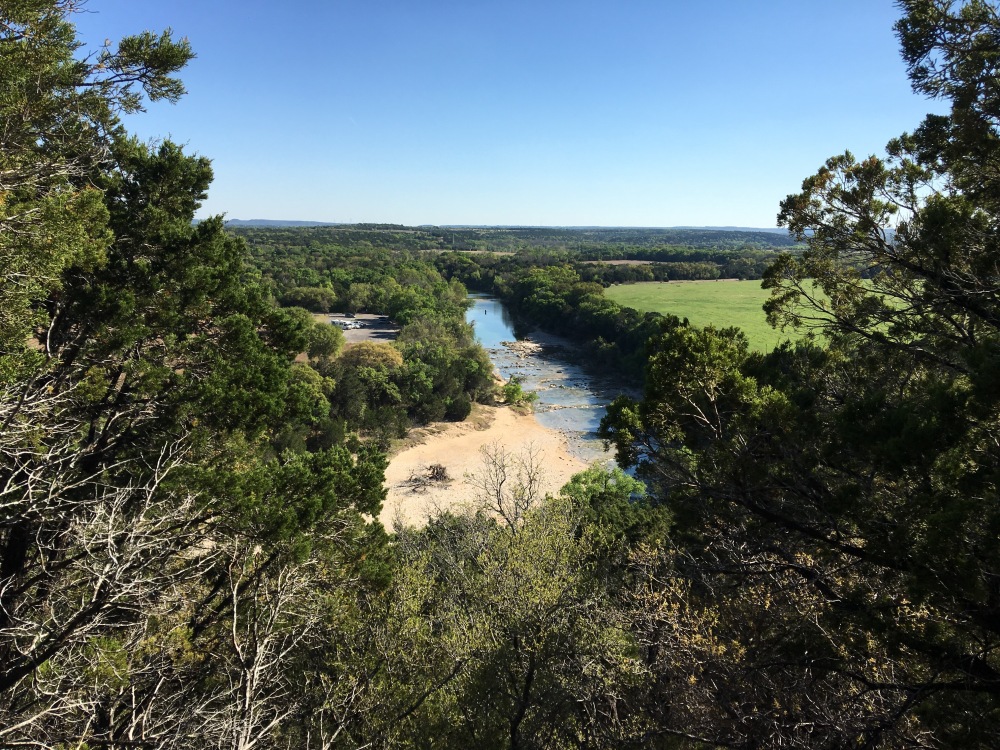 Dinner was pretty quick to make since I pre-marinated and froze the chicken. All we had to do we start a camp fire, chop up some veggies and add them in the foil packet. Since we had rain the first night, I decided to also make the chicken pineapple skewers. Mhmm, what a delicious feast, but the best was still to come. S’mores of course! I like my marshmallows slightly burnt all around so the center is slightly gooey. Followed by some beautiful star gazing and a slightly cool night. 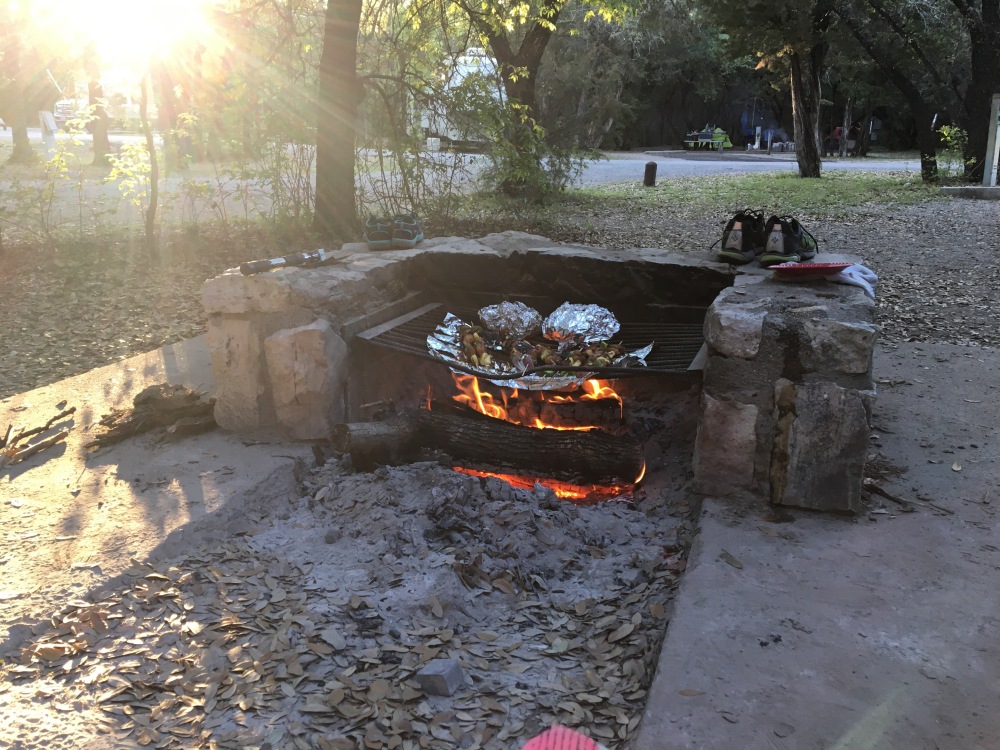 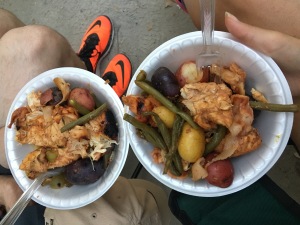 Our early bird friends had us awake before sunrise. One last campfire to heat up breakfast while packing up our campsites. Quick showers and we were ready to check out. It was a soggy Tuesday morning but all the empty campsites around us started filling up with new campers. The weather forecast showed that it would be a rainy day in that area. So we got on the road and headed to Waco to visit Kyle’s brother, Baylor, and of course Mangolia Silos! (But that’ll be in next week’s blog post)

So Dinosaur Valley State Park is a great place for tent camping even in the rain. Plenty of trails and dinosaur tracks to explore. Beautiful sights and relatively easy river access. I hope y’all enjoy it as much as we did.