An early out of work on a Thursday afternoon, a drive home to toss my suitcase in my car, a drive to Houston and then I was finally on the bus. New Orleans, Louisiana bound! Yep, I was a first timer and so exited. One of my best friends from college, Trish, planned the whole trip to celebrate her birthday.

The bus ride, oh the midnight bus ride. Trish arranged for me to travel with two of her friends. I don’t recommend taking a bus. It was crowded, someone smoked weed in the bathroom, people were not shy to invade the little personal space you have and someone got kicked off for smoking on the bus. Definitely didn’t sleep, but we made it to New Orleans just before 7 am.

We stayed at the Hyatt Regency, which happened to be around the corner from the bus and train station. Checked-in, and unpacked a little bit. I was rooming with our friend Jessica, who was flying in later, from Chicago. Took about an hour nap, then up and running out to the front drive to catch our Uber to our 9:30am 10 miles historical bike ride tour.

Whew! It got humid! The ride was was nice and pretty cool to learn and see some history outside of the French Quarter. This time it was Trish, her brothers and I. We used Bullfrog Bike Tours and I highly recommend them. Our guide was nice, funny, and knowledgable. We used their special for 4 or more that’s a %15 discount. (With as much as we did every penny counts.) We made our way starting in the French Quarter, then toward the Mississippi River , down Esplanade Avenue, and took a break at Morning Call by the Botanical Gardens. Mhmm! Snacked on some beignets and ice cream. Some where along the way we went through St. Louis cemetery 3, Louie Armstrong Park, and some other historical areas most people don’t get to see if they don’t venture beyond the French Quarter.

After that long bike ride, you would think we’d get back and nap right? Nope! Team No Sleep back in action. When we arrived back at the hotel and two more joined in on the party. Our friends Darvin and Jess arrived. A quick shower off, change of clothes and on a to a shuttle bus we went. Bayou bound for our swamp tour. We went with Cajun Pride Swamp Tours. Trish found a groupon about a month before. Their shuttle bus picked us up and dropped us off at our hotel. This was probably one of my favorite activities we did.

Gators, gators, gators, alligators galore! Never have I ever seen so many alligators at once. I also didn’t know how much alligators liked marshmallows! I even got to hold a 3 year old gator. How tiny right? Can you imagine how old those bigger one in the pictures must be? I think the tour last about 2 hours. Back at the dock you can buy food (try the alligator on a stick), drinks (they have adult beverages too…party don’t stop) and souvenirs. I was so surprised I didn’t get any mosquito bites!

I took a nap on the bus ride back, actually almost everyone took a nap on the ride back. Another shower and I was dolled up and ready for a late dinner. Of course, we had dinner at the original Pat O’Briens on Bourbon Street. There was about a 45 minute wait which wasn’t too bad for a Friday night and a group of 10. I split a plate of Alligator Bites and a plate of Crawfish Étouffée with one of my friends. Pretty good amount of food, but super salty.

After dinner we ventured around the foul smelling Bourbon Street. My very first time, and maybe I’m too old for it or I was exhausted (only slept 2 hours in the past 48 hours) or a combination of both. It was like the dirtiest part of dirty 6th street on steroids. Apparently you can walk around with your drinks in to go cups. No wonder it smelled so bad, all those sugary drinks spilling everywhere over time. Whew! Every corner there were these pizza and slushy shops, that had different flavored adult slushy beverages. Also, Jell-O shots. Every time we walked down a block my friends went in and had one. I was ready for bed.

Some how we all split up on the way back to the hotel. A few of us walked, a few of us took an uber, and one of us ended up at Cafe Du Monde! Unfortunately I was not the one that went to Cafe du Monde. However, that person did bring some beignets back for all of us to munch on. And that ends day one in New Orleans. Day two coming up next. 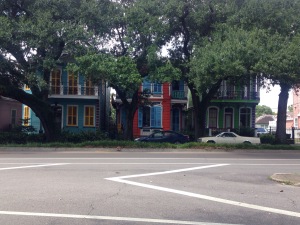 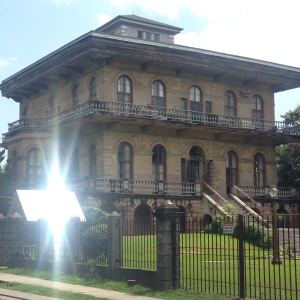 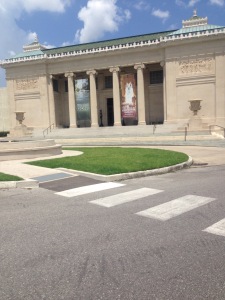 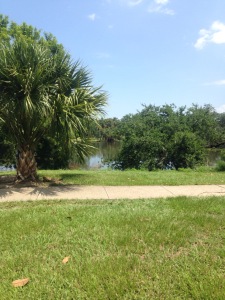 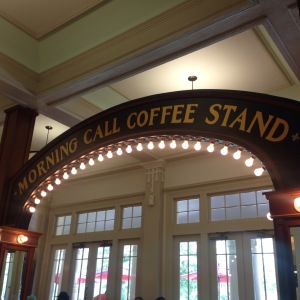 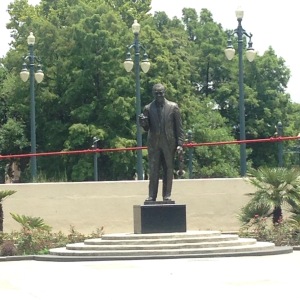 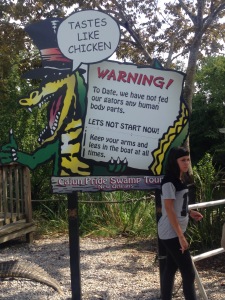 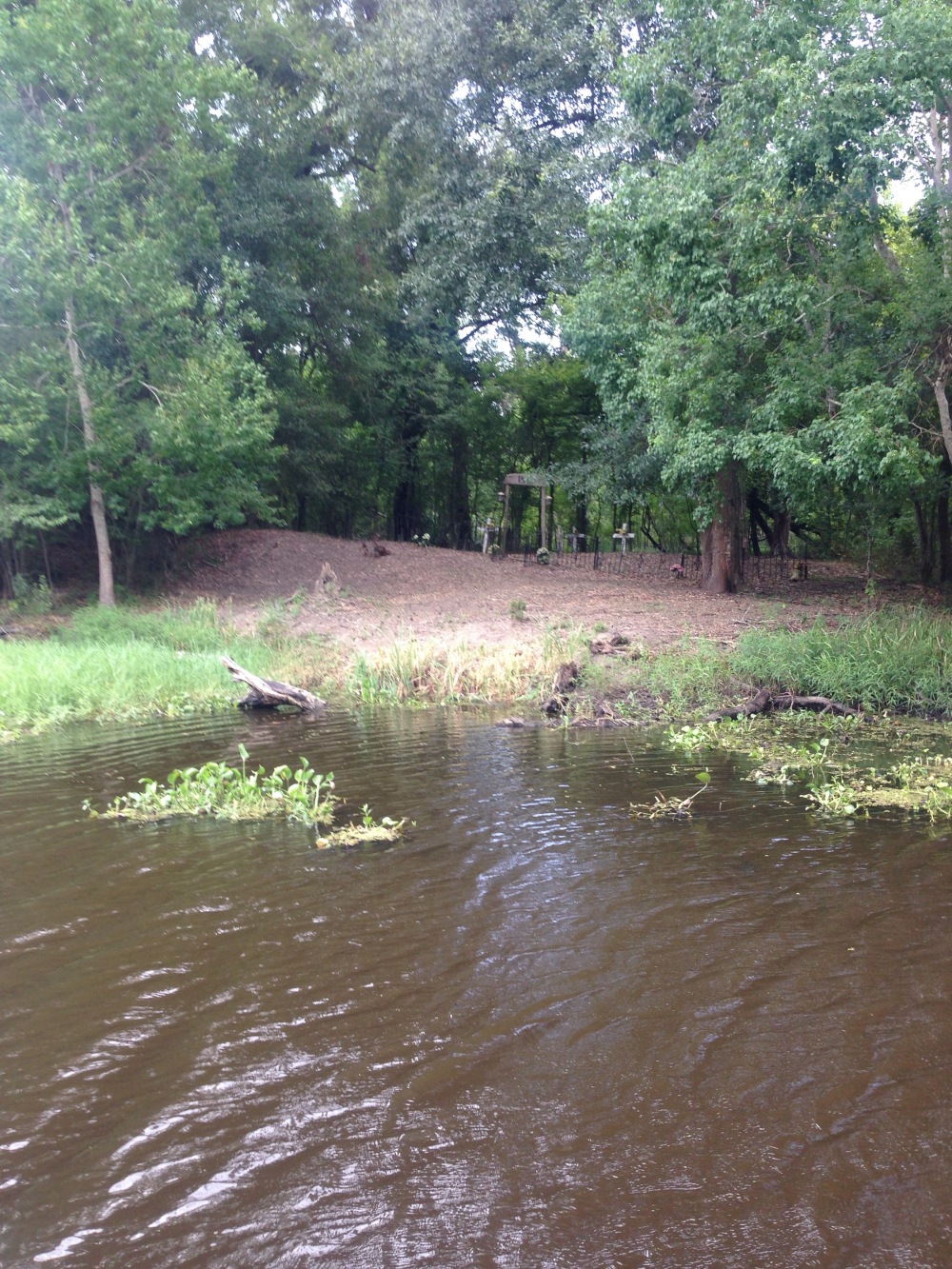 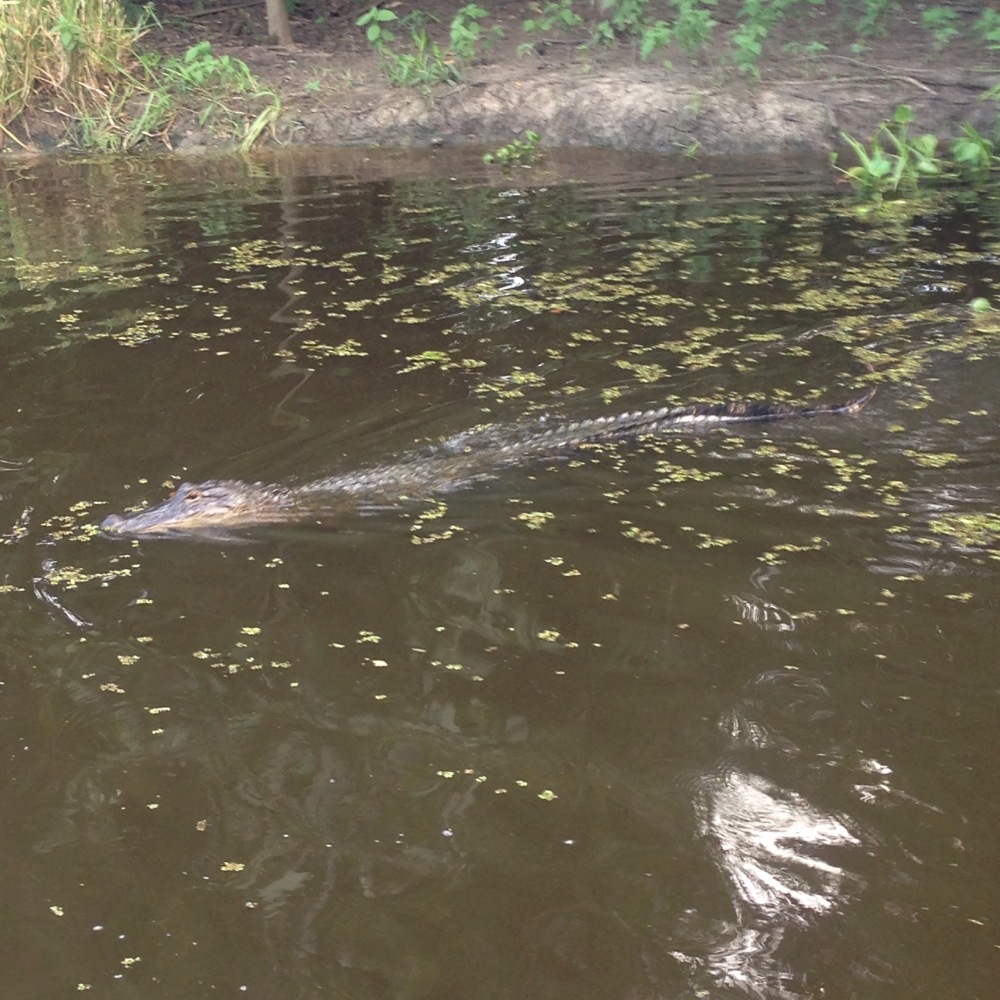 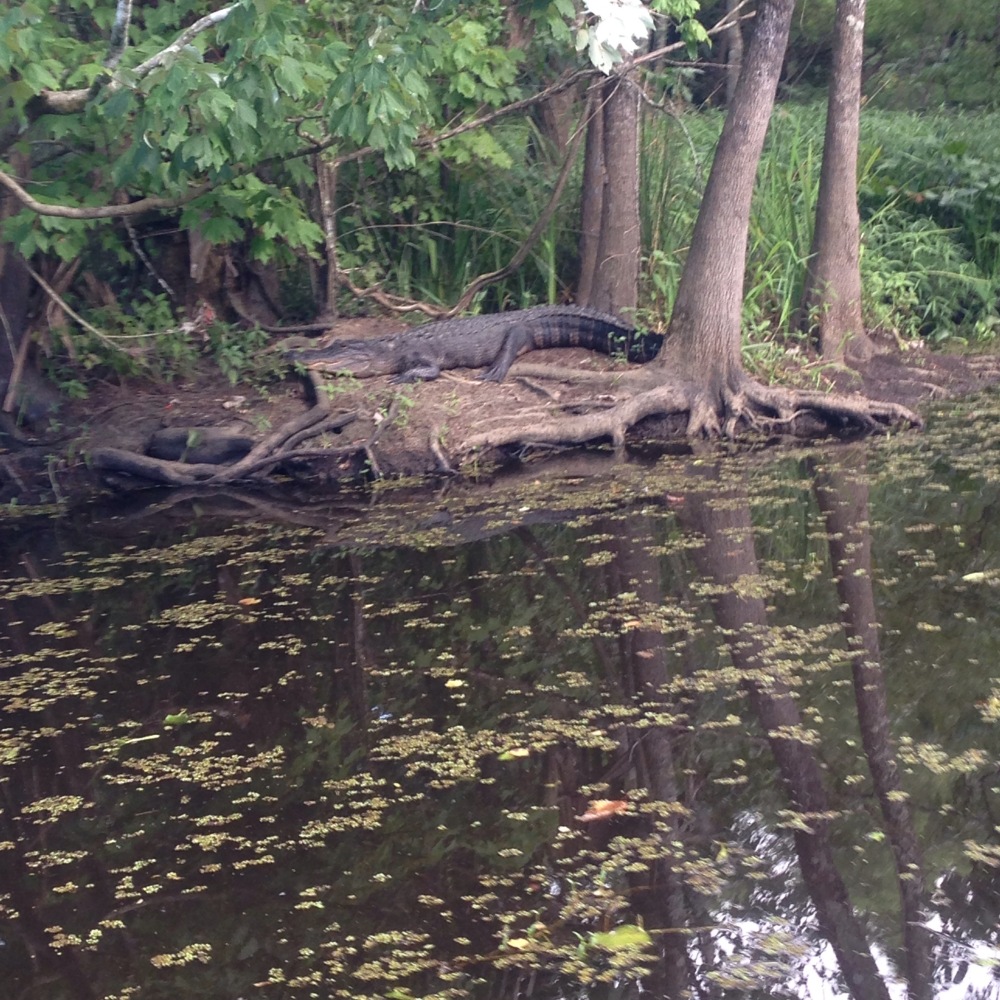 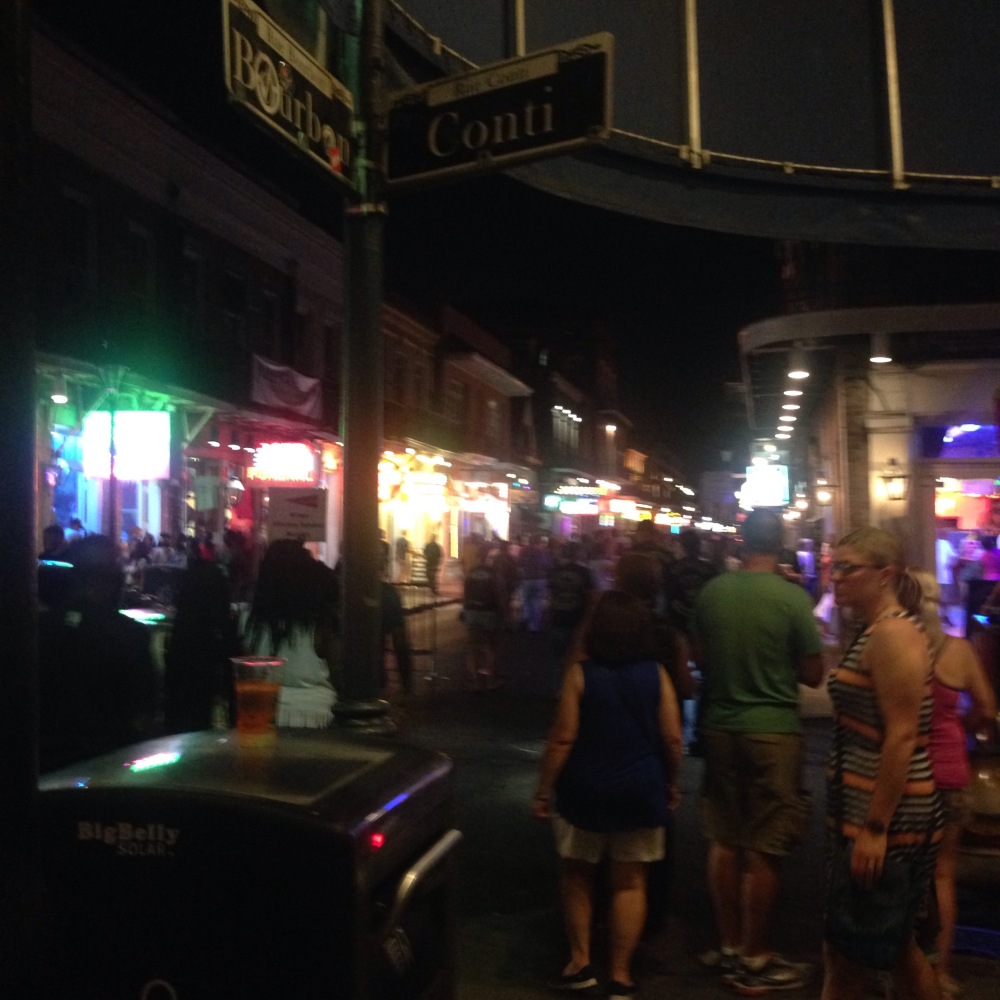 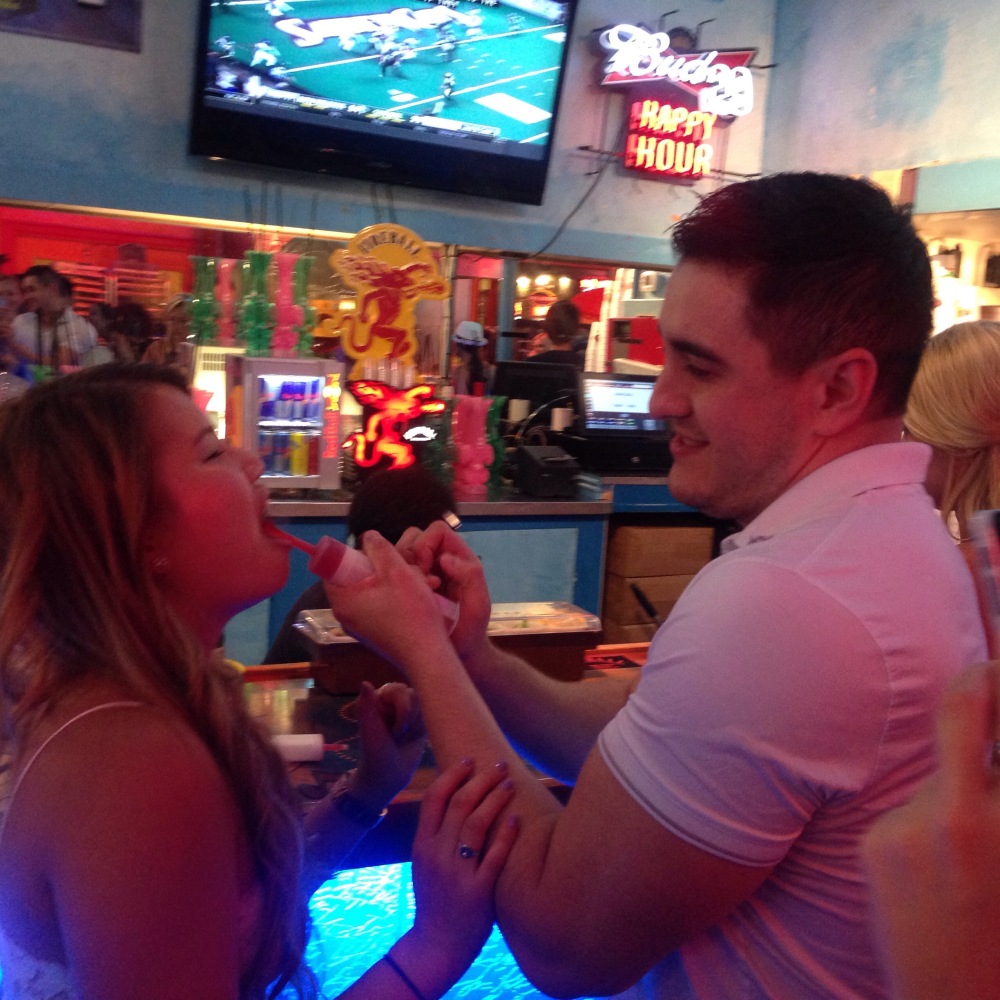 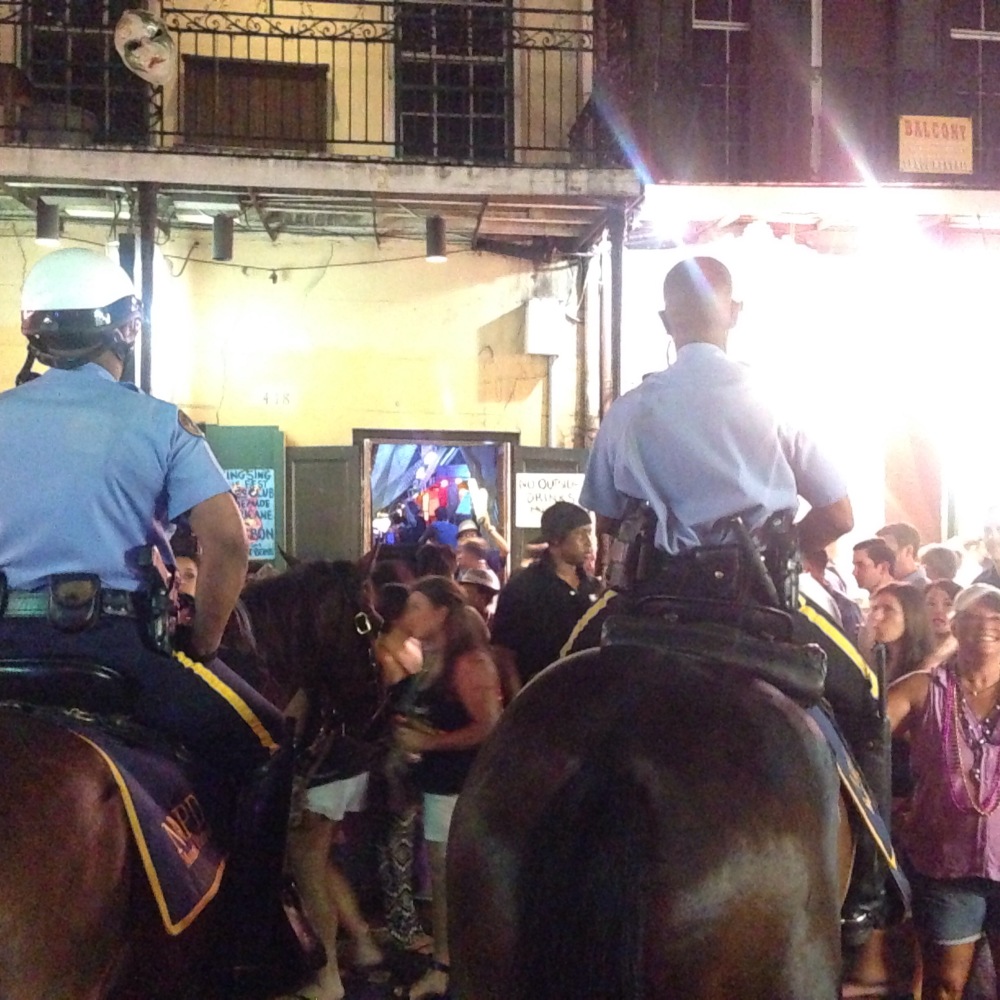